We’re working hard to make sure The Elder Scrolls Online runs as best as it possibly can. Read our plan for the game’s upcoming performance improvements from ESO’s Creative Director Rich Lambert and check back monthly for status updates.

With the launch of Elsweyr, we wanted to give you an update on our ongoing performance optimization initiatives, our future plans, and when–generally–you can expect to see the improvements. This will be a living document, and it will be updated as new information becomes available.

We know that ESO performance has degraded for some players, especially on the base PS4™ and XB1. We’re not happy with this, and we know how important it is for us to alleviate the situation and give regular updates on what we are doing. A game that’s still going strong after five years brings a number of challenges to keep it running as smoothly as possible. Technology and player behavior changes over time, and of course the amount of available content continually expands. All of these can impact performance, and they have in ESO.

This article is the first step in a new process of making sure that everyone knows what we’re working on. The goal is to outline the things we have planned, explain why a particular item is important to overall stability or performance, and provide a target for when we think the work is going to be complete and on the live servers. Please keep in mind that some of these fixes reach very deep into the architecture of the game and require a lot of care, time, and testing. Because of this, the target dates on some of the initiatives may shift as work progresses. 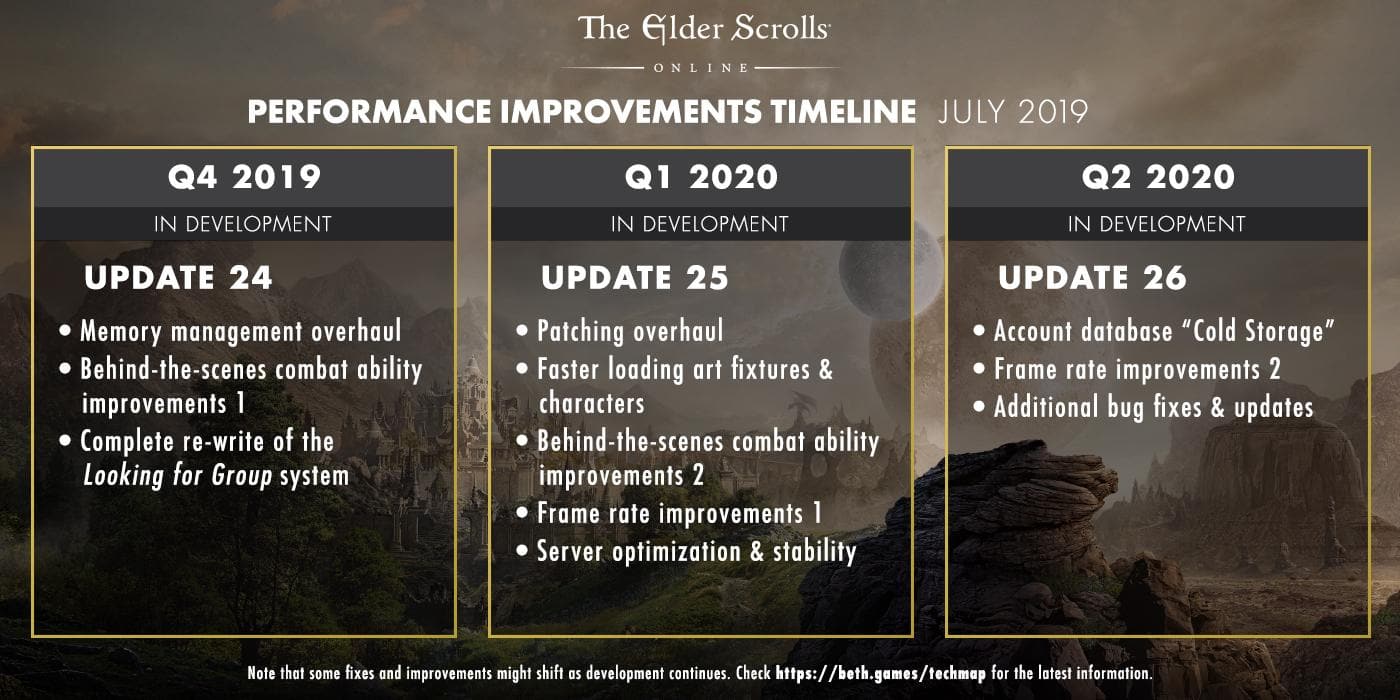 As you can see, we have a huge amount of work ahead of us. There’s a ton of stuff to do and as time progresses, you should expect that some of these items may change—especially the investigative tasks since we aren’t 100% sure what will be uncovered. Regardless, we will keep you updated. Watch this article and our official ESO social channels for updates at least once a month.

Thanks, everyone, for being patient with us while we work through these issues. See you all in Tamriel!

That’s it! Don’t forget to keep an eye on this article for monthly updates on the status of the above improvements—we can’t wait to bring all these updates to you.

If you want to particiate, please log in or register!